The oldest traces of life found on the land of Karlovo date back to the neolithic age, 6th millennium BC. In the area Yasa Tepe to the west of Karlovo, there was a neolithic settlement.

The Thracian tribes which populated the around present-day Karlovo in the early iron age 6th c. BC and late iron age 6tth  c. BC – 1st c. AD ,according to researchers are  described by the collective ethnonym Odrises and this was a territory controlled by the kings of the Odrises.

The periods of Roman domination, 1 st-4 th c., and late antiquity-4th-6th c., are characterized by large-scale construction of roads, road facilities and fortresses throughout Karlovo valley. The Roman route connecting the Black Sea coast and Serdica passed north of Karlovo. Traces of this road were visible until recently east of Sushitsa residential district. Many fortresses were built to guard this road and the settlements near it. One of them is Karlovo Kale, north of the town, date 4th-6th c. Another one is Sushitsa Kale, east of present-day Sushitsa residential district, which continued its functions during the 12th-14th c.

In the Middle Ages near present-day Karlovo there were several settlements. One of them was east of the town, near St. Pantheleimon area, and is probably the medieval Bulgarian Sushitsa. At the foot of the Balkan Range, on the right bank of  Stara Reka stood  the medieval Bulgarian monastery St. Spas. In the 13th c. these lands were part of the family possessions of the three Bulgarian boyars Smilets, Voysil and Radoslav. It was often the theatre of wars between Bulgaria and Byzantium.

In  the 1370s Karlovo was conquered by the Ottoman Turks. This new  period  marked the origin of the town as a successor of the medieval Bulgarian settlements and fortresses which existed in the neigh-bourhood. At the end of the 15th c. Sultan Bayazid II awarded the Ottoman general Karli  Ali Lala Bey with the village and adjoining lands as a feudatory.

In 1485, with materials from the destroyed St. Spas monastery, Ali Bey constructed Kurshum Mosque which is the oldest architectural monument in the town. In 1496 Ali Bey left by will the land of the settlement for the support of the mosque. He bequeathed the management of this vakif to his five sons and their heirs.

The Turks settled in the old Sushitsa, called kasaba /town-administrative and economic centre/ and Bulgarian population was pushed to the south of Kurshum Mosque, where the Bulgarian Shan neighbourhood was set up.

The name of Karlovo was established later and probably comes from the father’s name of Karli Ali Bey: Karli ova – ‘’ Karli’ land’’.

The town reaches its peak in economic and cultural growth in the period of the National Revival. In Karlovo there were water-mills, a market with about 450 shops, solid storehouses for goods, a clock tower, 18 inns, fountains, bridges.

The specific natural features – the proximity of  Stara Planina and the shortage of fertile land, the remoteness from major trade routes and its status of vakif predetermined the development and prosperity of the crafts.

The good conditions for dressing hides the abundant raw material and good markets predetermined the boom of leather manufacture already in the 16th c.

Cotton and cotton print manufacturing and dying developed extensively in Karlovo. In the 19th c. these products conquered nearly all markets on the Balkan Peninsula.

Before the Liberation in Karlovo there were 40 foundry shops where large quantities of brass rings and ink-pots were cast. This was the only centre which supplied such goods to Turkey, Northern Macedonia and Edrine region.

In connection with the oil-bearing rose production with held a fore most place in Karlovo, the coppersmith’s trade developed. Together with the other south of the Balkan Range towns, Karlovo became an important centre for production of wrought copper vessels, which in the 19th c. numbered 47 kinds.

Karlovo was the only place in the region of Plovdiv, and perhaps in Bulgaria, where after the Liberation still functioned four shops for the making of tin brandy flasks.

In the town there were many shoemakers whose shoes and slippers were exported to the large markets of the Ottoman Empire. There was a number of builders, black-smiths, glass-blowers and gunpowder producers.

The Karlovo goldsmiths ‘’work gold and silver – both thick and fine –with great mastership’’, Raino Popovich wrote. The jewellery of the local goldsmiths and silversmiths was sold at the large fair in Uzundjovo.

Evidence for the large diversity of crafts in Karlovo is also the total number of trade associations in the town, which was 24 in 1829. Apart from the above-mentioned trades, there were associations of tailors, packsaddle-makers, silk producers, carters, fullers, makers of goat’s-hair rugs, bags etc., potters, caftan makers * tailors of upper men’s clothes*, weavers of cloth, etc.

Woollen  braid  making  was of major importance for the economic life and the population of Karlovo. Karlovo  held the first place in woolen braid production in the Ottoman Empire. Every three months it exported 150 loads of woolen braid, which is about 60,000 okas 1 oka is a little over 1 kg a year.

Rose growing and the production of rose oil played a major role in the economic past of Karlovo. The Karlovo and Kazanluk valleys are the rose gardens of the country. A large portion of the final product was exported to France, England, Istanbul, ets., which is a proof of the excellent quality of the Karlovo attar of roses. The processing of the rose petals was done by the rose producing farmers in small coppers installed under sheds. These little rose distilleries were called ‘’gyulpanas’’. The rose oil was stored in ‘’konkums’’ – tin-plated copper vessels.

The economic growth attracted to Karlovo many Bulgarians from the neighbouring villages which increased the Bulgarian population. Part of the town dwellers got richer, their way of life changed and enterprising in different branches of economy. Karlovites demonstrated great initiative in the sphere of education and culture.

In the 19th c. Karlovites took part in all attempts to liberate Bulgaria and other nations.

After the Liberation, with the loss of the vast markets of the Ottoman Empire, like most artisan revival towns Karlovo underwent a period of economic decline. Traditionally the development of the textile industry and rose production continued. ‘’Evlogi Georgiev’’ factory was opened 1891, tanneries and sausage plants were set up. In 1926 ‘’Stara Reka’’-one of the first hydroelectric power stations in Bulgaria was set up here.

Karlovo gave Bulgaria notable and generous donators among whom the brothers Evlogi and Hristo Georgievi who sponsored schools, churches, hospitals, and the construction of the largest university in Bulgaria –‘’ St. Kliment Ohridski’’  in Sofia.

In the beginning of the third millennium Karlovo is a modern town, combining the modern with the invaluable cultural and historical heritage and traditions, with the unique natural landmarks. 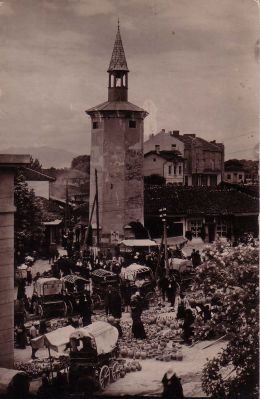